Two challenging plays return to the Market Theatre: Death of a Colonialist and Girl in the Yellow Dress

To quote Kentridge’s famous line:  ‘Johannesburg, second greatest city after Paris ‘ ….  Well, we might not have the range and selection of live theatre of the West Ends and Broadways but we get a lot of really excellent productions in Jozi.  And you certainly can’t see good theatre internationally for as little as R66 (that’s what a ticket costs on Tuesday nights at the Market Theatre).

Death of a Colonialist

I have just booked for Greg Latter’s  The Death of the Colonialist which has received excellent reviews. It ends next Saturday 16th October.

The Market Theatre’s write up summarizes the play:

Death of a Colonialist tells the story of Harold Smith, an aging, eccentric, unpredictable but extremely passionate history teacher at a high school in Grahamstown. His passion is South African history, most specifically the history of the amaXhosa. Harold is at the end of his powers and his increasingly erratic teaching techniques are making the school’s hierarchy look for some new blood in the history department. He is aware of the moves against him but believes his passionate teaching will always win the day.

What Harold is not aware of is that his wife has terminal cancer and has decided not to tell him. His two children, who have moved overseas, decide to come home for an unconventional family reunion. Some hard truths await Harold, who is so wrapped up in his own life and his passion for history that he is unaware of the personal tragedy unfolding in his own life. Dealing with questions of identity, history and terminal illness, this is a funny, sad, profound and passionate play that weaves between the tragedy of our past and the challenges of our present. Ultimately, Latter’s play reinforces what it means to be South African. 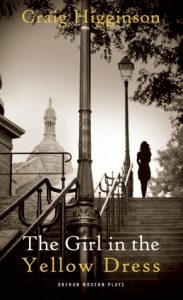 Girl in a Yellow Dress

The Girl in the Yellow Dress, written by Craig Higginsons and directed by Malcolm Purkey,  is another excellent production which is returning for a re-run at the Market.  I missed it last time around so am going to make sure I see it this time before it comes off on the 18th December.  The Market Theatre’s synopsis: ‘Originally inspired by Ovid’s story Echo and Narcissus and psychoanalytic writings on narcissism, The Girl in the Yellow Dress is set in contemporary Paris and deals with the exchanges between Celia, a beautiful English teacher in her late twenties, and Pierre, her younger French-Congolese pupil.  Brimming with humour, rage and longing, this internationally celebrated South African play provides a minute exploration of an increasingly hazardous romantic entanglement and an insight into some of the tensions between the ‘first’ and ‘third’ worlds.’